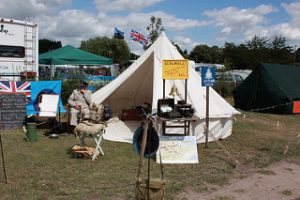 BBMF re-enactors is a group of eight people who try to re-create the look of the men and women who served in the Royal Air Force in the Second World War. Yes a few of us are waaaay to old to be in the RAF but we are trying to show the uniforms and equipment of the time not to actually be the personnel. When the Memorial Flight ask, we go along to their events to add a little period flavour to their wonderful aircraft. And hopefully remind any veterans of their time in the service. We display not only uniforms but our large collection of flying kit and equipment. As already stated we are a closed group and as such are not open to applications for membership but we will occasionally invite other re-enactors we know to join us at events.

The benefits of the Festival to the community